WHAT HAPPENED: Not even Ivan Lendl, a three-time US Open titlist, could help Alexander Zverev's consistent Grand Slam struggles this fortnight in New York. The fourth-seeded German suffered another early Grand Slam exit on Saturday night, falling to countryman Philipp Kohlschreiber, 6-7, 6-4, 6-1, 6-3, in the third round. It was Zverev's best showing in New York, but well short of the 21-year-old's aspirations for the season's final Grand Slam tournament.

The right-hander came into New York eyeing a title, or at least another Slam quarterfinal after making his first at Roland Garros (losing to Dominic Thiem). Zverev changed his New York routines, going out less and hanging out with family more in an attempt to make his stay in the city of eight million more routine, more mundane.

He added Lendl, who had been instrumental in helping Andy Murray win his first Grand Slam title at the 2012 US Open, to his team. But, for the third time this season, Zverev exited a Grand Slam in the third round.

“(Lendl) said that it's a process of getting there. It's a process of playing well at Slams. He told me before the tournament started that, 'Hopefully you'll do very well at the US Open, but we're more looking towards next year. We're more looking towards being at latter stages, competing for Slams next year,’” Zverev said. “I still want to win, obviously... I wanted to go far. But wishes don't always come true.” 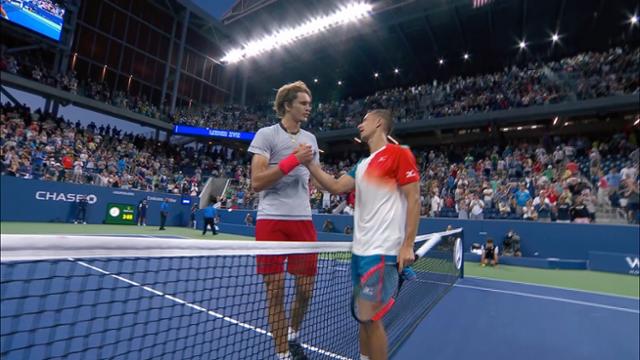 The 34-year-old Kohlschreiber hadn't beaten a top 5 player at a Grand Slam since the 2009 Roland Garros, when he swept then-No. 4 Novak Djokovic (now 2-10 overall). He hadn't beaten Zverev in three years, since the 2015 US Open.

But Kohlschreiber kept him off-balance and took advantage of an up-and-down day from the 21-year-old, who never looked settled inside Louis Armstrong Stadium, despite having beaten Kohlschreiber last year on grass and earlier this year to win the Munich clay-court title.

“I returned his serve quite well, so I was able to manage all the power and force he had to put many balls back. Then I think during the points I played with the right strategy. I played low balls, high balls, lots of angles. I think over the time he got more frustrated,” Kohlschreiber said. "Also the match was, I think, in my favor, going a little bit more physical. We played a lot of long rallies. I'm very happy how everything worked for me.”

Zverev nearly blanked Kohlschreiber in the first-set tiebreak to overcome a sloppy game at 5-3, when he served for the opener but double faulted and shanked a volley to get broken.
Kohlschreiber, however, pressured Zverev and broke to love in the 10th game of the second to even the match. The veteran dictated rallies with his one-handed backhand and kept Zverev guessing with a mixture of slice and topspin from his backhand wing.

“Normally I play not so much slice in my game. But I think this is something not many players can do anymore on the tour, to play a really good slice,” Kohlschreiber said. “Obviously (he’s) a very tall guy. He's not yet the guy who likes to move in the court, go to the net.”

The 6-foot-6 Zverev won less than half of his 41 trips to the net (49 percent, 20 of 41). He handed Kohlschreiber a double-break lead in the third set with a double fault, one of his seven on the day. Zverev finished with 53 unforced errors to 39 winners.

“I think I do quite well against big guys,” Kohlschreiber said. “I move around the big guys a lot. Obviously that's maybe one of not their strengths."

Five times in 2018, though, including three at Roland Garros, Zverev had been down two sets to one, and all five times he had come back to win the match. He led by an early break in the fourth, 3-0. But Kohlschreiber won the final six games to make his fifth Round of 16 in Flushing (5-3 in third-round matches).

“He has everything. He can use a lot of topspin, can hit the ball flat, use a lot of slice. He can mix it up well. It's tough to get a rhythm against him sometimes,” Zverev said.

“I think I do quite well against big guys,” Kohlschreiber said. “I move around the big guys a lot. Obviously that's maybe one of not their strengths."

Kohlschreiber will try to reach his second Grand Slam quarterfinal (2012 Wimbledon, lost to Jo-Wilfried Tsonga) when he faces 2014 US Open finalist Kei Nishikori of Japan. The German is 1-9 in Grand Slam fourth-round matches.

For Zverev, it's another Slam that ends in disappointment. But the German still has much to play for in 2018, including a return appearance at the ATP Finals in London in November. Last year he became the youngest qualifier at the season finale since Juan Martin del Potro in 2008.

“There's a lot of focus on the Grand Slams,” Zverev said. “I've obviously done well in Paris, but not at the other Grand Slams this year maybe for different reasons. I mean, Australia, I played against (Hyeon) Chung, who played very well. Wimbledon I was still recovering from an injury. Here I played a good opponent. Just couldn't find my best game today.”

Photos: Men in action on Day 6 of the US Open