WHAT HAPPENED: Rafael Nadal had spent more time on the court than any other player at the US Open in 2018. To be exact, 15 hours and 54 minutes, which included his punishing five-set turnaround against Dominic Thiem in the quarterfinals. And in the end, it cost the defending champion and world No. 1. With his right knee clearly compromised, the Spaniard couldn’t withstand the onslaught of third-seeded Juan Martin del Potro, who advanced to the final for the first time since claiming his lone Grand Slam title in 2009, 7-6, 6-2 ret.

“Of course, it’s not the best way to win a match,” said del Potro, who came into the tournament at a career-high No. 3. “I love to play against Rafa because he’s the biggest fighter in this sport. I don’t like to see him suffering on the court.”

“[But] I’m so happy to be in the final again,” added the 29-year-old. “It means a lot to me. I didn’t expect to be in another Grand Slam final that’s my favorite tournament, in New York at the US Open. I had my biggest memories playing on this court in 2009. But I was a kid. Now I’m much older.” 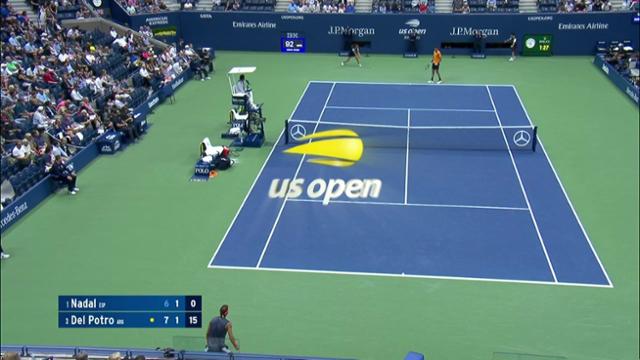 “You could imagine it was very difficult for me to say goodbye before the match finishes,” said Nadal, who added that he had been dealing with his knee woes since the early rounds. “But at some point, you have to make a decision. It was so difficult for me to keep playing at the same time that way, having too much pain.”

The big-stage victories are all the sweeter these days for del Potro. That will happen when you’ve undergone four wrist surgeries at the Mayo Clinic, sat out 14 Grand Slams, and endured the kind of dark, doubt-filled days the Argentine has, wondering if he would ever pick up a tennis racquet again.

On Friday afternoon, del Potro returned to the court upon which he scored the very biggest wins of his career, wins that convinced us he would soon turn tennis’ reigning duopoly into a power trio. He’d defeated Nadal in the semis that year, after all, before snapping five-time champion Roger Federer’s 40-match tournament win streak in a five-set final.

During the seemingly endless post-surgery recoveries and rehab sessions, he prayed for a return to the sport he so loved, not quite daring to dream of reaching another major final. But he’ll do just that on Sunday at the USTA Billie Jean King National Tennis Center, facing either Novak Djokovic or Kei Nishikori.

SEE ALSO: Juan Martin del Potro’s love affair with the New York crowd has been the running storyline of his US Open campaign – even if the Argentine, himself, has been running on fumes at times.

This was del Potro and Nadal's third straight meeting at a major in 2018, and the fourth in the past five, dating back to last year’s US Open semis, which saw Nadal win in four sets.

Nadal had motioned for a trainer to sit courtside before the first ball was even struck, but when the action got underway, few sensed that he was compromised in any way. In fact, he saved a pair of set points with his opponent serving at 5-4 in the opener, and eventually forced a tiebreak. However, the 6-foot-6 del Potro didn’t let the opportunity slip away this time around, surging ahead, 6-2, in the breaker. On the next point, Nadal sent an errant backhand into the net to surrender the 70-minute set.

On the first changeover in the second set, Nadal would have his right knee taped up for a second time, and it soon became clear that he was dealing with physical issues. He was subsequently broken for 1-3, and his mobility was limited the rest of the way. It initially appeared that Nadal was prepared to play a third set, but the Mallorcan soon approached the chair to inform ump James Keothavong that he couldn’t go on. Always the sportsman, del Potro gestured toward his injured opponent, giving fans an opportunity to applaud the felled three-time titlist, who claimed trophies here in 2010, 2013 and 2017.

Photos: Rafael Nadal vs. Juan Martin del Potro semifinal at the US Open

There was a time when del Potro’s backhand was a true liability. Post-surgery, he simply didn’t trust it, more often than not employing the slice. But nine of his 29 winners against Nadal came from his weaker side, as he stepped up and punched through his two-fisted stroke.

A crowd peppered with the occasional sky-blue-and-white Lionel Messi jersey was quick to join a vociferous group of del Potro’s pals in chants of OLE, OLE, OLE, OLE, DELPO, DELPO!, and prior to Nadal’s pullout the atmosphere frequently resembled a World Cup gathering. But del Potro had a warning for his supporters, who had traveled north en masse from his hometown of Tandil: “Enjoy the final, because after the final you have to go home,” he quipped.

Unfortunately, Rafa Nadal has retired after 2 sets in the semifinals, sending Juan Martin del Potro through to the final...#USOpen pic.twitter.com/uegztbgIyl

WHAT IT MEANS: Nadal’s retirement means del Potro has closed the gap in their career head-to-heads. But Nadal still leads, 11-6, having won three of their past four matches, including a 6-4, 6-1, 6-2 decision in the Roland-Garros semis earlier this year, and a 7-5, 6-7, 4-6, 6-4, 6-4 quarterfinal win at Wimbledon. Delpo will now turn his attention to the winner of the Djokovic vs. Nishikori clash. He trails Djokovic, 14-4, but owns a 6-2 advantage against Nishikori.

MATCH POINT: It’s been some year for del Potro, who, in March, claimed the first ATP World Tour Masters 1000 title of his career in Indian Wells, where he saved three championship points against Federer.