USOpen.org joined a small roundtable discussion to chat with Osaka about being a role model, getting distracted by baguettes and thinking, "What would Serena do?"

Q: Naomi, where does that mental strength come from?

Naomi Osaka: I think it’s based a lot on my dad. Ever since I was little, he’s been telling me these wise words, but I’ve never really wanted to listen, but as I grew up I appreciated what he was saying more.

Naomi Osaka: The most clichéd things that you can think of. I can’t really say. It’s always something that makes you go, ‘Ugh.’ It’s really annoying. I can’t really think of one.

Q: What was your preparation like today? What was it like waking up in the morning to play your first Grand Slam major final?

Naomi Osaka: I woke up and I was sweating. I was so nervous. My heart was racing the entire day, I think that wasn’t good for my health. I couldn’t eat anything, I felt like I was going to throw up. I was just so stressed. I kept calling my sister, my poor sister. So yeah, it was really good preparation.

Q: When you talked with your sister, I assumed she’s trying to talk you off the ledge, what was she trying to tell you to get you to calm down?

Naomi Osaka: She was just telling me to think of it as just another match and then I would yell at her, “You’re crazy, this is a Grand Slam final.” Since she’s in Paris, she’s showing me these random croissants and baguettes to try to take my mind off it. It kind of worked.

"For me, I never thought that I was beating her. In my mind, I always think she’s going to come back from this. Because I’ve watched so many matches where she comes back from a really hard position, so I never tried to put my foot off the gas, I just kept thinking next point, next point, next point then before I knew it, it was over."

Q: Naomi, you said you were nervous, but it was the opposite on the court, it was so calm, so composed. Without any context, people wouldn’t know that you’re playing your first ever Grand Slam final. How is that possible? How are you on the court so calm and composed?

Naomi Osaka: I’m not really that sure. I think when I go on the court I sort of become a different person. Today, I was thinking that I have this really amazing opportunity to play against one of the greatest players and I really shouldn’t take this chance for granted and I should just fight for everything and never get upset because that would be so disrespectful, so I just kept thinking about that.

Q: A lot has been made of the fact that you grew up idolizing Serena. Maybe some young children who are watching you for the first time this week are going to want to be inspired to play tennis because of you. How surreal is it knowing that youngsters watching you for the first time might be thinking, “I want to grow up to be the next Naomi Osaka?”

Naomi Osaka: I would tell them don’t do it. I mean, it feels a little bit crazy. I think growing up and watching people you idolize, you always dream that one day you’ll be in that position. So to be in that position right now, I don’t really know. I feel like I’m a big kid that doesn’t really understand how the world works right now because mainly I’ve just played tennis my whole life and I haven’t really thought much of anything else. I feel like it’s a responsibility but I’m also really glad to have that responsibility. 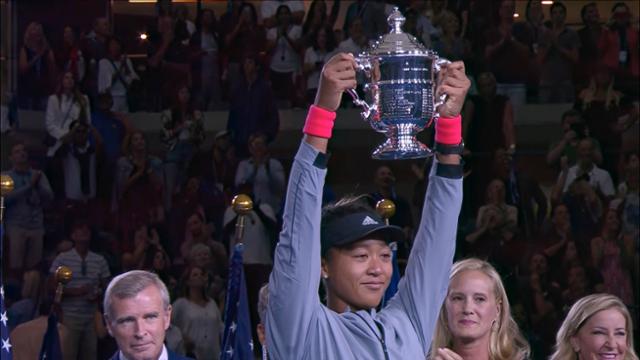 Q: Was there ever a moment today where you thought, “What would Serena do?”

Q: Naomi, similar, the entire match, every time you had a break point or there was a pressure moment, you came up with really good shots. She was playing at a pretty good level but then you would hit the winner. What was your reaction to that when you were beating her and playing better?

Naomi Osaka: For me, I never thought that I was beating her. In my mind, I always think she’s going to come back from this. Because I’ve watched so many matches where she comes back from a really hard position, so I never tried to put my foot off the gas, I just kept thinking next point, next point, next point then before I knew it, it was over.

Naomi Osaka: I hope people don’t look at me differently. I don’t know, for me I feel like I will stay the same person. I’m not really sure what’s going to change. I haven’t gone outside of this facility yet. I’m not sure what to expect, to be honest.

Q: Can you imagine some day down the line, you playing someone who I guess is 4 years old right now? To have that kind of longevity in your career. Can you imagine being around that long playing tennis?

"When I step on the court, I'm not a Serena fan - I'm just a tennis player playing another tennis player. But when I hugged her at the net, I felt like a little kid again."

Q: [Coach] Sascha [Bajin] says you crave the big stage. Do you think that’s accurate and could you just explain that side of your personality a little bit, because it doesn’t show that much actually.

Naomi Osaka: Thank you. For me, because I’ve spent so much of my life on courts where no one really watches, I think I always like when people watch because it feels like all the hard work you put in is finally being shown. That’s the moment where I try my best because I’m not an attention seeker, but I like when there’s a lot of people watching my matches . I feel like it’s more fun on the big stages. There, a different side of my personality comes out because normally I don’t, no offense guys, I don’t like being surrounded by people.

Q: You seem kind of like a shier person. Is it sometimes a little bit of a conflict where it’s great that a  lot of people are watching me but at the same time you don’t want all those eyes on you?

Naomi Osaka: Whenever I play tennis I feel like it’s something I’m really good at and something that I know -- not that it’s a talent, but that I’ve worked at it for so long -- [so] I want people to watch.

But then when I’m off the court, I just feel like I’m just really weird, so I don’t want people to see me. I don’t know how to explain it.

Q: You’re on a very short list of people who have beaten Serena in their first two matches against her. I’m curious, in both matches you’ve played well. Has it every occurred to you in your mind that it would be really insulting to her if I’m sitting around saying, "I look up to this woman and she’s the only reason why I play," and then get pasted. You know what I mean? That something about playing your idol and wanting to show that your idol worship is worth it, or valued, does that bring the game out of you. Yes or no?

Naomi Osaka: I never thought that way, but since you said it, I’m concerned. I’m not really sure because I’ve never been in the position. Isn’t it kind of like raising a kid though? Like the kid grows up with you and you’re looking at the kid and you’re like, “Wow I’m proud of you.” Then you’re cooking something in the kitchen and then the kid suddenly comes and cooks better than you. I feel like you would be proud but at the same time it would make you want to work harder. I don’t know, I hope Serena isn’t mad at me.

Naomi Osaka: You really scared me.

Q: It’s been a year since you beat [Angelique Kerber] here, your first Top-10 win. What do you think is the biggest thing you’ve learned about yourself both as a person and a player in the past 12 months?

Naomi Osaka: I’ve learned that I love New York. I just feel like I’ve gotten more confidence in myself. I think beating her and then doing well in Indian Wells for sure boosted my confidence. Between Indian Wells and here I haven’t really done that well, but I think just to regain that mentality coming into this tournament, I feel really proud of myself and I know that I do really well here. I’m just really happy I was able to win.

Photos: Serena Williams vs. Naomi Osaka in the US Open women's final