WHAT HAPPENED: A dialed-in Novak Djokovic won his 14th Grand Slam title, and third US Open crown, with a 6-3, 7-6, 6-3 victory over Juan Martin del Potro. Throughout the match, Djokovic patiently prodded del Potro with shape and slice, repeatedly turning defense into attack with unrelenting depth and precision to keep the Argentine on his back foot for much of the three-hour, 15-minute match.

With the crowd firmly behind him under the roof in Arthur Ashe Stadium, del Potro battled to the bitter end, levelling sets two and three after dropping an early break in both. Ultimately, the Serb was too solid.

The first “Ole Delpo” song rang out at 1-1, 30-30, started by the "Tandil 12," and soon rained down from every corner of the stands. But Djokovic was comfortable playing the foil, and he answered with a pair of forehand winners as he went through deuce to hold.

"This might sound funny, but my nickname is Nole. When they shout, 'Ole, ole, ole, ole,' that's what I hear," he said at his post-match press conference. "I actually make myself hear that, to be honest, no word of a lie. I really do... When the roof is closed, trust me, it's very, very loud down there. It takes a lot of effort to actually stay poised in the moment. I'm glad I managed to do that."

That third game was the closest either man came to a break, until the Serb created an ad-out opening with his opponent serving at 3-4.

On Djokovic's first break point of the match, a familiar cross-court backhand rally broke out until he found the right moment to pull the trigger towards the del Potro forehand, drawing an error with the Tower of Tandil on the run.

The timely break helped Djokovic win six of the next seven games to serve out the set and take a 3-1 lead in set two. Del Potro’s lone game in that stretch – a service hold to open set two – was a struggle in which he wiped away a break point.

After their man got on the board in that game, del Potro's fans showed off their support with a new song in their repertoire, "Soy Argentino," as the players changed ends. But it was Djokovic’s variety that cut through the noise as he seemingly gained command of the match. 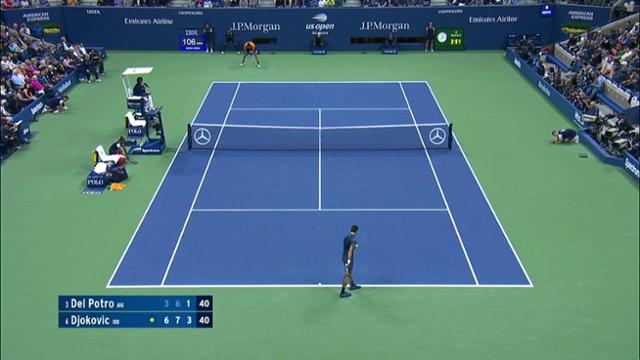 The Serb was cruising on serve, while his returns – "the best of all time," according to the ESPN commentary by John and Patrick McEnroe – constantly pushed del Potro onto his back foot despite booming serves that reached 136 mph. With Djokovic firmly on course to spoil the party in Ashe, del Potro was searching for an answer.

And with Djokovic serving at 3-2, del Potro found his window, riding two forehand winners and a pair of untimely errors off the previously pristine Djokovic forehand to level the set. He edged in front with a love hold for 4-3, setting the stage for an epic eighth game of the set.

And the award for best performance by a fan in a leading role goes to...

The two men battled through 22 points for over 20 minutes, and Djokovic ultimately prevailed after saving three break points. It felt like another turning point in the match, with both men exhorting the crowd: del Potro raised the roof after a slew of laser forehand winners and again with a daring down-the-line backhand winner that set up one break point, while Djokovic raised his arms to the rafters after thumping two deep overheads to win his most impressive point of the game.

The 95-minute set was destined for a tiebreak, and it was del Potro with an early 3-1 lead after a pair of forehand winners. But Djokovic grinded his way to a 4-3 advantage, and del Potro’s forehand let him down as he surrendered a decisive minibreak, dumping a forehand into the net off an unusually tame mid-court return. Two more forehand errors – one of them unforced, his 15th of the set – gave Djokovic the set and a vise grip on the match.

Djokovic takes the 2nd set after 1 hour and 35 minutes of grueling tennis!

He grabs the tie break and now takes a 2 set lead over Del Potro...#USOpen pic.twitter.com/xvSXOt8yZB

The Serb again took an early lead in set three, spurred on by a dramatic deuce point at 1-1. Once again showing off his reach and flexibility, he rubbed elbows with the back-court linesmen as he scrambled near the wall, clinging on until del Potro sailed a forehand long. The point left the Argentine slumped with hands on knees, and he soon found himself on the edge of defeat, down 3-1.

With his uncanny ability to swiftly move in any direction combined with his unwavering patience on the court, Djokovic could be likened to a spider, the design on his blue Lacoste shirt depicting his web. As the match wore on, he had del Potro ensnared, the Argentine unable to shake loose no matter how hard he blasted his forehand.

There was still one last push left, as del Potro broke back to level the set at 3-3, but the result was never in doubt. The Serb regained control with his fourth break of the match, and a booming overhead sent him to the ground in celebration of his second Grand Slam title in as many majors.

WHAT IT MEANS: Djokovic is, without a doubt, back to his best – the sort of form that propelled him to 12 Grand Slam titles before his elbow injury that sidelined him during last year’s US Open. He has spent a total of 223 weeks at the ATP’s No. 1 spot, including a 122-week run from July 2014 through November 2016, and will edge closer to reclaiming that top spot by improving to No. 3 in Monday’s rankings.

After losing to Stan Wawrinka in the 2016 final, Djokovic did not get beyond the quarterfinal stage in any of the five majors he played – a barren run by his lofty standards. In comparison, he reached the semifinals in 23 of 24 majors from Wimbledon in 2010 to the French Open in 2016.

"I don't want to think about that level again because I feel like I'm on a whole new level," he said in his post-match press conference. "That's kind of my approach and my thinking. I just want to create from this moment onwards the most that I can create for myself, to get the best out of myself in every possible moment."

Now a back-to-back Grand Slam winner for the first time since he held all four titles after winning the 2016 French Open, Djokovic has moved level with Pete Samapras in the all-time Grand Slam men's singles trophy count.

"[Sampras] was my childhood idol," he said. "There is a lot of significance of me being now shoulder-to-shoulder in terms of Grand Slam wins with him. It's truly incredible when you think about it. I watched him win one of his first Wimbledon championships, and I grew up playing and thinking that one day I'll be able to do what he does. To actually be here, it's a dream come true."

While equaling one legend in Sampras, he overtakes another, Roger Federer, as the ATP’s all-time prize money leader ($119 million), thanks to his $3.8 million winner’s check.

"I love you guys. I'm so happy to be back in the final against this magnificent idol and friend."

The outpouring of this evening has been unbeatable...@delpotrojuan #USOpen pic.twitter.com/cJoab1KpUf

For del Potro, he was nine years and 22 majors removed from his previous appearance in a major final, when he lifted the New York title in 2009. A win on Sunday would have set a record for most Slam events played between a first and second title.

MATCH POINT: The Serb was dominant throughout his championship run, dropping just two sets in seven matches. He ended the tournament winning 16 consecutive sets. In the 21 sets he won in his US Open title run, Djokovic dropped more than four games just once – in Sunday’s tiebreak second set against del Potro.